Dishonesty Is Not in The Eye of The Concealer

Zac and Tim Morley (pseudonyms) are brothers and farmers. At the time of a hearing before the Court of Appeal, the pair were charged and preparing for trial in the County Court for fraudulently inducing a retired couple to invest $395,000 during 2009 – 2010. The investment was supposedly for the purpose of buying 26,335 goats at $15 per head that would be fattened and then sold for a profit. However, the prosecution alleges that, at the time of the agreement with the investors, the brothers and their goat farming business were in a “parlous financial position” and were in breach of another acquisition agreement with a Malaysian company. On this basis, the prosecution alleges that the funds were not used for the agreed purpose and that the brothers either made a false promise to the investors or dishonestly concealed material facts as to their true financial position.

It is an offence under the Crimes Act 1958 (Vic) to fraudulently induce a person to invest money, punishable by a maximum of 15 years imprisonment. 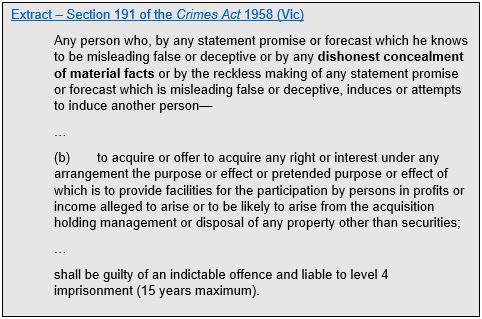 The accused and the prosecution accepted that dishonesty was a core element of the charges, but the parties could not agree on the legal test. The trial judge made a ruling in favour of the accused which the Crown appealed to the Court of Appeal. The issue before the Court of Appeal — constituted by President Maxwell and Justices of Appeal Priest and Kay — was “the test to be applied by the jury in deciding whether any concealment of material information was dishonest.”[2]

The Court of Appeal summarised the position of the parties in the following way:

The prosecution submits, as it did before the [trial] judge, that the word ‘dishonest’ is used in s 191(1) in its ordinary sense, such that the jury should be directed that the question of dishonesty ‘is to be decided by the standards of ordinary, decent people’. The defence submission, by contrast, is that the jury would also need to be satisfied that the relevant respondent knew that his conduct was dishonest according to the standards of ordinary people.[3]

This was not a unique dispute. Adopting High Court and Victorian precedents over a conflicting Western Australian decision, the Court of Appeal adopted the prosecution’s formulation and overturned the trial judge’s earlier ruling.

Accordingly, ‘dishonesty’ is determined objectively. While the prosecution must prove amongst other things that the accused knew of relevant facts, appreciated their materiality to the investor, and deliberately concealed material facts, there is no requirement to prove that the accused had a subjective awareness of their dishonesty.

Note: This article is for information purposes only and is not legal advice. If you wish to obtain advice from a qualified fraud barrister about a particular matter, please contact Duxton Hill. We are a Specialised Fraud Law Firm in Melbourne Specialising in Fraud Law & investigations.